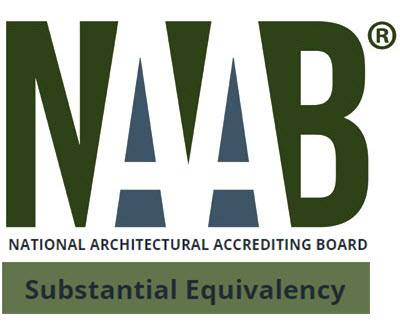 The Architectural program in the college of Architecture and Planning, at King Saud University was given the Substantial Equivalency, SE by the National Architectural Accrediting Board, NAAB, in the United States, for six Years starting from January, 2013. The program is now preparing to welcome the next NAAB visit to renew the SE in the spring, 2019. Given the NAAB Substantial Equivalency in January 2013, the Architecture program at King Saud University was the first in the Kingdom and the second program, after Kuwait University, to achieve the NAAB Substantial Equivalency in the Arabian Gulf Region.  To obtain the SE, NAAB conducted three successful visits to the architecture program, the first was operated by Mr. kin DouBeus, in December, 2010, and the second was operated in December, 2011 by Mr. Moris Brown and Prof. Fatih Rifki. A team headed by Mr. William Davis, in December 2012, operated the third visit. Before the first visit, the Architecture Program submitted an institutional overview and before each of the second and third visits, an Architectural Program Report was submitted to NAAB administration. Based on the Visiting Teams Reports of the three visits, NAAB rewarded the Substantial Equivalency to the Architecture Program at King Saud University in January 2013 for six years. Getting the NAAB Substantial Equivalency, the university leaders, the college administration and the program’s faculty members and students are happy and proud with this successful achievement. The term “substantial equivalency” identifies a program as comparable in educational outcomes in all significant aspects, and indicates that it provides an educational experience meeting acceptable standards, even though such program may differ in format or method of delivery. The designation is valid for six years beginning 1 January of the year in which the final visit (Visit 3) took place. In order to maintain the designation, the program must be visited again in the sixth year of the designation. King Saud University, College of Architecture and Planning, Department of Architecture and Building Sciences has received the substantial equivalency designation from the National Architectural Accrediting Board for the following professional degree program or sequence: Bachelor of Architecture, January 2013, substantial equivalency designation was awarded. Attached Files APR  KSU, visit 3 King Saud VTR_cof-3 2013 NAAB PROCEDURES FOR SUBSTANTIAL EQUIVALENCY SE Conditions 2019 King Saud VTR for Visit 2 PSER Program Self - Evaluation Report Final decision letter from NAAB, January 2013. 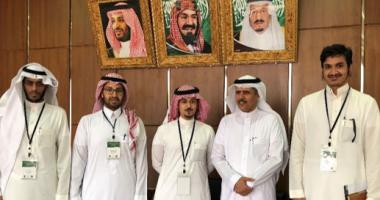 Report: Eng. Ali Ajlan Urban and architectural heritage is one of the most important engines of development in society and a guide to its intellectual, cultural and historical achievements. 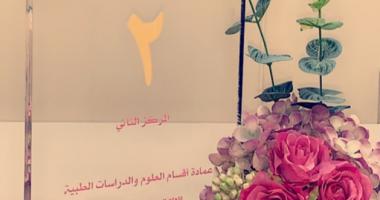 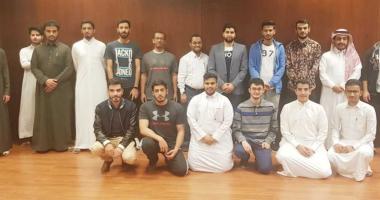 Conclusion of the Revit course - College of Architecture and Planning

To establish a school of architectural thought in the domain of: • cultural continuity, • environmental sustainability, and • technological development A school of thought is a collection of a group of people who share common characteristics of opinion or outlook of a philosophy, discipl

The Department of Architecture and Building Science at King Saud University was first established in 1387H (1967/68G) as a department within the College of Engineering. The department represents the first school of architecture in the Arabian Peninsula and in the Arabian Gulf region. Department’s graduates represent the leading generation of architects and planners who participated in the establishment of schools and colleges of architecture in the different regions of the Kingdom of Saudi Arabia. They are now undertaking top positions in their fields at both government and private sectors. The Department continued to develop and expand in terms of student population and faculty members as well as the development of study programs and constituent courses. In view of the economic and urban growth witnessed by the Kingdom and the expanding needs for architects and planners, the department was transformed into an independent College of Architecture and Planning in the academic year 1404/05H (1984/85G).

The Department of Architecture and Building Sciences awards its graduates the degree of Bachelor of Architecture upon successful completion of 170 credit hours and sixty days of field training. The Department’s program is dedicated to the design studio education process that employs project-based learning to represent professional behavior and motivate students through meaningful application of the knowledge that they acquire. The design studio courses are complemented by courses in theory, history, technology, environment, and practice taught by distinguished scholars in those topics to assure that students may design from a base of extensive and comprehensive knowledge of the built environment.

The Department also offers a Master of Architecture degree (M.Sc.) which was initiated in the year 1406H (1986/87G). The introduction of the doctoral program, (Doctor of Philosophy in Architecture Ph.D.), in the academic year 1425/26H (2003-04G) was a natural outgrowth of the Post-graduate program. Ever since, it is the only architecture department offering such a degree in the entire Arabian Gulf region.

As a pioneer of architectural education in the Kingdom and the region, the Department of Architecture and Building Sciences adopts an educational strategy based on the following:

• Maintaining the values of Muslim culture, Saudi community traditions, and the ethics of architectural profession. This is made through preserving the Islamic values, respecting the needs of Saudi community, and adopting profession’s ethics.

• Keeping abreast advances in the field of building technology. This is made through maintaining strong relation between academic qualification of graduates and the advancements in the building industry and the use of computer technology.

The stated strategy is supported with more than 50 faculty members who are holders of PhD degrees in architecture from prestigious universities. They all participated in securing better educational environment and several research projects and grants to the Department and a number of them were delegated to governmental and private institutions to assist in the development of the Nation and Society. The strategy is also supported by several laboratories and two research chairs which are: King Abdullah bin Abdulaziz Foundation’s Chair for Developmental Housing Architectural Research and Prince Sultan bin Salman Chair for Architectural Heritage. Additionally, in terms of the community service, the Department of Architecture and Building sciences has participated in many of the national and international competitions and which are part of the national development policy in the kingdom. The department has also started the process to achieve the substantial equivalency by the National Architectural Accrediting Board, NAAB.